By Mary Mouton on November 30, 2016 in Uncategorized 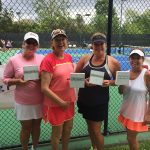 Aces Against Aneurysms, an initiative started by aneurysm survivor Rebecca Winchell, announced its annual fundraising tennis tournament. The ladies tournament will take place on Monday, April 10, 2017 at Pelican Athletic Club in Mandeville. Proceeds from this year’s tournaments will go toward the LSU Department of Neurosurgery. Cost of entering each tournament is $50 and participants must register by contacting Barbara Fisher at bfisher@thepac.com.

The purpose of the tennis tournament is to raise funds for aneurysm research and education in the local community.

View all posts by Mary Mouton →