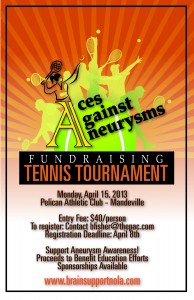 Aces Against Aneurysms, an initiative started by aneurysm survivor Rebecca Winchell, has scheduled its fourth annual tennis tournament for April 15, 2013 at Pelican Athletic Club in Mandeville.  Proceeds from the tournament will fund aneurysm medical research.  Cost of entering the tournament is $40 and participants must register by April 8 by contacting Barbara Fisher at bfisher@thepac.com.

Winchell survived a  potentially deadly brain hemorrhage as a result of an aneurysm three years ago and made a promise to raise awareness in the area.  Proceeds from the tennis tournament are earmarked for the National Brain Aneurysm Foundation and aneurysm research.

An aneurysm is an abnormal  widening of an artery.  A bulging sac forms and can burst, resulting in massive bleeding in the brain.  People are typically born with aneurysms and it sometimes takes  forty to fifty years before causing problems. Or it may never cause problems.

An estimated 6 million people in the United States have an unruptured brain aneurysm, or 1 in 50 people. The annual rate of rupture is approximately 8 per 100,000 people or about 25,000.

Symptoms of a ruptured brain aneurysm often come on suddenly. They may include:

The purpose of the tennis tournament is to raise funds for aneurysm support, offer aneurysm screenings and education in the local community.  To register for the tournament, contact Barbara Fisher at bfisher@thepac.com  before April 8.  Twitter: @AcingAs

View all posts by admin →

Stroke and Brain Injury Support Group Meeting – May 10
Next Post