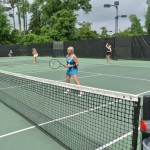 Aces Against Aneurysms, an initiative started by aneurysm survivor Rebecca Winchell, has scheduled its 11th annual ladies’ tennis tournament for April 6, 2020 at Pelican Athletic Club in Mandeville. The ladies’ tournament is a round robin format (partners will be provided), as well as a silent auction and resale of gently-used tennis attire. $50 fee. To register, email bfisher@thepac.com .

A fundraising tennis tournament started by a local brain aneurysm survivor will host its 11th tourney on Monday, April 6 in Mandeville. The Aces Against Aneurysms tennis tournament has raised over $140,000 over the years for aneurysm research and awareness.

The tournament will take place Monday, April 6at Pelican Athletic Club in Mandeville. The tournament was started by Rebecca Winchell of Mandeville who wanted to do more to educate patients and families recovering from brain aneurysms.    She started a nonprofit, Brain Support NOLA and fundraising efforts have benefitted LSU Department of Neurosurgery and many patient awareness and support initiatives in the New Orleans area.

“It is inspiring to see how our organization has grown over the last decade ,” Winchell said.  “We are often approached by brain aneurysm survivors, their families and caregivers. They are either looking for support or want to help raise awareness.”

The ladies’ tournament is a round robin format (partners will be provided), as well as a silent auction and resale of gently-used tennis attire.  More information is on brainsupportnola.com .  To register, email bfisher@thepac.com .

An aneurysm is an abnormal widening of an artery. A bulging sac forms and can burst, resulting in massive bleeding in the brain. People are typically born with aneurysms, it sometimes takes forty to fifty years before causing problems. Or it may never cause problems.

An estimated 6 million people in the United States have an unruptured brain aneurysm, or 1 in 50 people. The annual rate of rupture is approximately 8 per 100,000 people or about 25,000.

Symptoms of a ruptured brain aneurysm often come on suddenly, they may include:

The purpose of the tennis tournament is to raise funds for aneurysm research and education in the local community. Twitter: @AcingAs Website: brainsupportnola.com